A global, model-agnostic, contrastive explainer for any text classifier

Imagine we have a text classifier, let’s say M1, that is retrained with new data generating M2.

ContrXT is about explaining how a classifier changed its predictions through time. Also, it can be used to explain the differences in the classification behaviours of two distinct classifiers at a time.

ContrXT takes as input the training data and predictions of two distinct classifiers M1 and M2. Then, it traces the decision criteria of both classifiers by encoding the changes in the decision logic through Binary Decision Diagrams. Then (ii) it provides “global, model-agnostic, time-contrastive (T-contrast) “explanations in natural language, estimating why -and to what extent- the model has modified its behaviour over time.

What ContrXT needs as input?

ContrXT takes as input the “feature data” (can be training or test, labelled or unlabelled) and the corresponding “labels” predicted by the classifier. This means you don’t need to wrap ContrXT within your code at all! As optional parameters, the user can specify:

What ContrXT provides as output?

(1) Indicators to estimate which classes are changing more!

A picture estimating the differences among the classification criteria of both classifiers M1 and M2, that are Add and Del values. To estimate the degree of changes among classes, ContrXT also provides add_global and del_global. In the case of a multiclass classifier, ContrXT suggests focusing on classes that went through major alterations from M1 to M2, distinguishing between three groups according to their Add and Del values being above or below the 75th percentile.

The picture above is generated by ContrXT automatically. It provides indicators of changes in classification criteria from model M1 to M2 for each 20newsgroup class, using a DT as a surrogate (0.8 fidelity) to explain two BERT classifiers.

(2) Natural Language Explanations for each class

The indicators allow the user to concentrate on classes that have changed more. For example, one might closely look at class atheism as for this class, the number of deleted paths is higher than the added ones 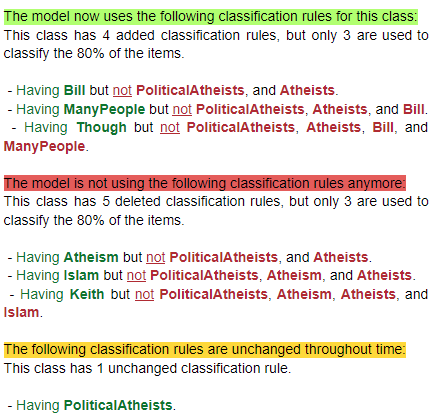 The Natural Language Explanation (NLE) for atheism reveals the presence of the word bill leads the retrained classifier M2 to assign the label atheism to a specific record, whilst the presence of such a feature was not a criterion for the previous classifier M1. Conversely, the explanation shows that M1 used the feature keith to assign the label, whilst M2 discarded this rule.

Both terms refer to the name of the posts’ authors: Bill’s posts are only contained within the dataset used to retrain whilst Keith’s ones are more frequent in the initial dataset rather than the second one (dataset taken from Jin, P., Zhang, Y., Chen, X., & Xia, Y. Bag-of-embeddings for text classification. In IJCAI-2016).

Finally, M2 discarded the rule having political atheist that was sufficient for M1 for classifying the instance.

The NLE shows the differences between the two models. However, a user might also wish to see example instances in the datasets where these rules apply.

To do so, ContrXT provides the get_rule_examples function, which requires the user to specify a rule to be applied and the number of examples to show. 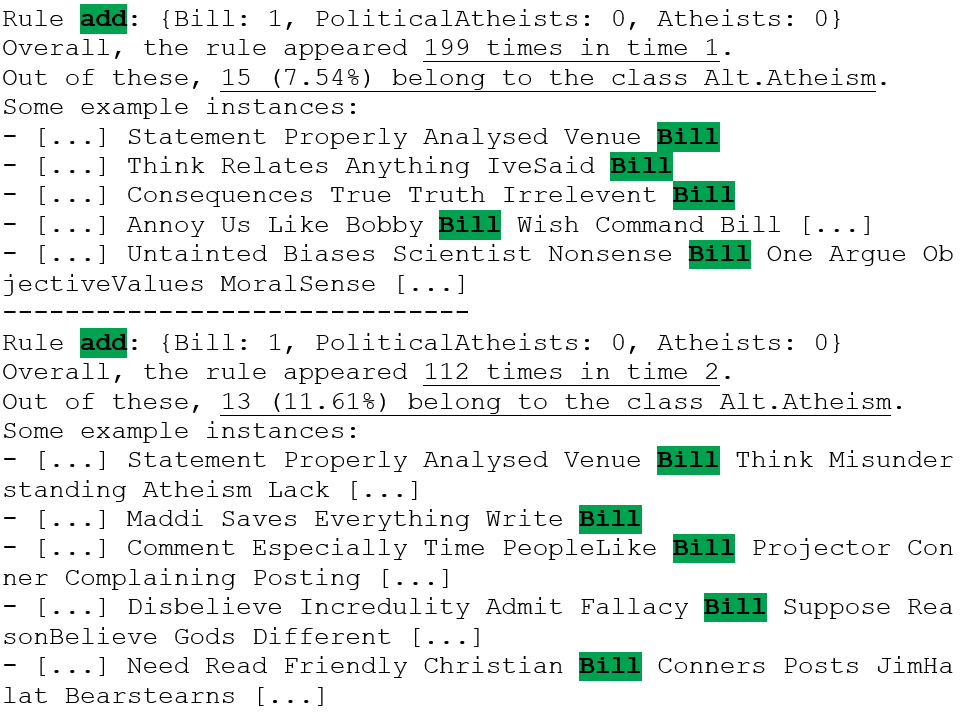 Do explanations lead to new insights?

Our experiments reveal Add/Del is not correlated with the models’ accuracy. For example, we assessed a correlation between Add/Del and the change in performance of the classifiers in terms of F1-score on 20newsgroup. To this end, we computed the Spearman’s \rho between the Add of every class and its change in f1-score between the two classifiers. The correlation values are not significant, p=0.91$, ro=-0.11 for the Add and p=0.65, ro=-0.04 for Del indicator. This confirms that Add/Del are not related to the f1-score of the trained model. Instead, they estimate its behaviour change handling new data, considering which rules have been added or deleted to the past.

Or clone the repository and run:

The PyEDA package is required but has not been added to the dependencies. This is due to installation errors on Windows. If you are on Linux or Mac, you should be able to install it by running:

However, if you are on Windows, we found that the best way to install is through Christophe Gohlke’s pythonlibs page. For further information, please consult the official PyEDA installation documentation.

To produce the PDF files, a Graphviz installation is also required. Full documentation on how to install Graphviz on any platform is available here.

A complete example of ContrXT usage is provided in the notebook “ContrXT Demo” inside of the main repository folder. A notebook example with ML model training is also available in this repository, which can also be accessed in this Google Colab notebook. Complete documentation of the package functions will also be available shortly.

Basic unit tests are provided. To run them, after installation, execute the following command while in the main directory:

ContrXT as a Service through REST-API

ContrXT provides REST-API to generate explanations for any text classifier. Our API enables users to get the outcome of ContrXT as discussed above (i.e., Indicators and Natural language explanations) with no need to install or configure the tool locally. The required input from a user are (i) the training data and (ii) the predicted labels by the classifier of their choice. Users are required to upload two csv files for two datasets for which the schema is shown in the following JSON.

The ContrXT’s API can be invoked using a few lines code shown in Code below.

Notice. To avoid improper use of ContrXT’server resources, we ask users to ask for free credentials through this link.

Currently, we support explaining predictions for text classifiers only, but we are working to extend it to deal with tabular data.

To cite ContrXT please refer to the following paper